I had a very lovely text yesterday, from someone who reads this, had noticed I haven’t been writing, and was just checking in to see if I was ok. It meant a lot, and no, I didn’t mind you getting in touch. Thank you for caring enough to do so. Because generally people don’t check in anymore. Not that I blame them. Everyone has their own lives to live, paths to walk, journeys to make. I know they’d be there if I reached out to them. It’s just that it’s not something that you feel like you can do when you’re lost down a rabbit hole. Who the h*ll would want to talk to someone feeling like that? It hardly makes me a sparkling conversationalist, and why would I want to drag someone down to these depths anyway?

But I’m still here. As it happens, now that Austin has moved out, and Tash has gone back to uni, I’m still here all by myself. Well not right now. Right now I’m at the pub writing this because I haven’t seen an actual person in two days, and I’ve only talked to a couple of people, not including work. It wasn’t doing my head any good, so I thought maybe I should go and see other people having a life, even if I don’t have one. That and I need to pop to the shop, so I forced myself to get my arse in gear and here I am.

Yes I’m still here. Living on my own. Except it’s not really living. It’s just existing. Sitting my empty house. The house feels weird, like no-one lives in it anymore. As the title to this latest epistle says, love don’t live here anymore. It’s quiet. Emptily eerily quiet, like a long abandoned ruin. And I know it hasn’t been long, and I’m sure I’ll get used to it, I’m just in the middle of a period of readjustment.

In the meantime, even though I know I should, I can’t seem to find the energy to arrange to see anyone. To go visit anyone. To exercise. To leave the house. Hell, I barely get out of bed most of the time, since that’s where I tend to work from too. And writing here? Well I’m just going to sit here and pour my pain on to the page again, and who wants to hear me going on and on about that? So I haven’t been writing either. I have at least managed to carry on working, but I haven’t invoiced anyone for months and I haven’t done my personal accounts for even longer. Not good.

The only thing I’m really good at at the moment is sleeping. 12 hours straight easy, however many alarms I set. Because however many alarms I set, my brain knows they’re just arbitrary, and as such can be ignored. There is no real reason I should wake up; I don’t have appointments, or plans, and so… I hit snooze over and over again, and eventually end up waking up far later than I wanted to, which just gives me something else to beat myself up about. But hey, at least I then have less of a day to get through before I can go back to sleep, right? 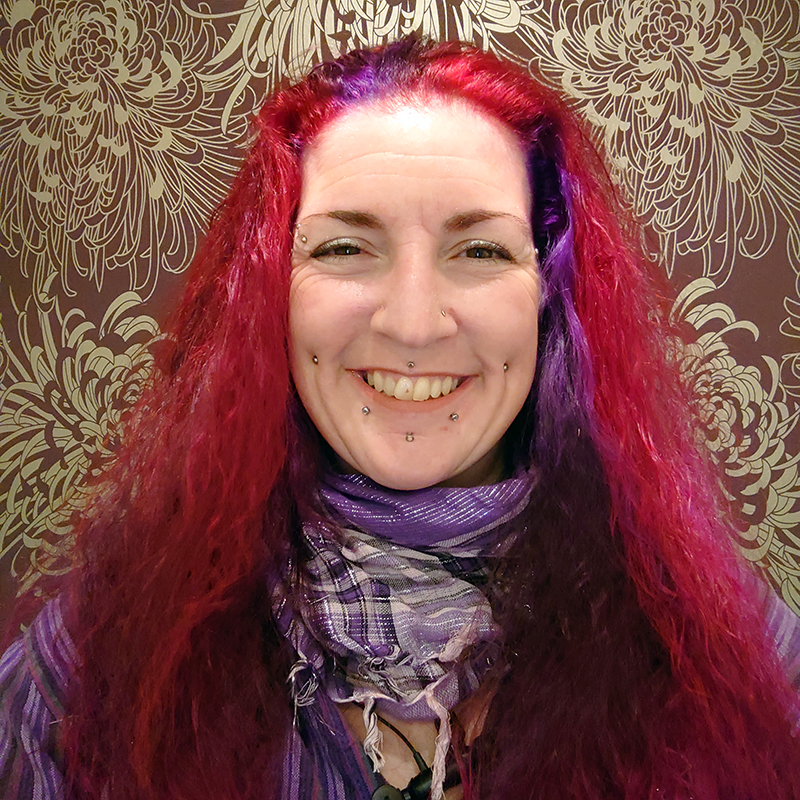 Sometimes I make an effort. I try and find something to do. As you can see, I’ve bleached and dyed my hair. I even put a smile on for the camera, as I was showing Tash the results. I’ve made a new pendant out of a goldstone heart that Matt bought me. I’m refurbishing a lazy susan I got secondhand. I’m binge watching box sets. Anything to kill some time… 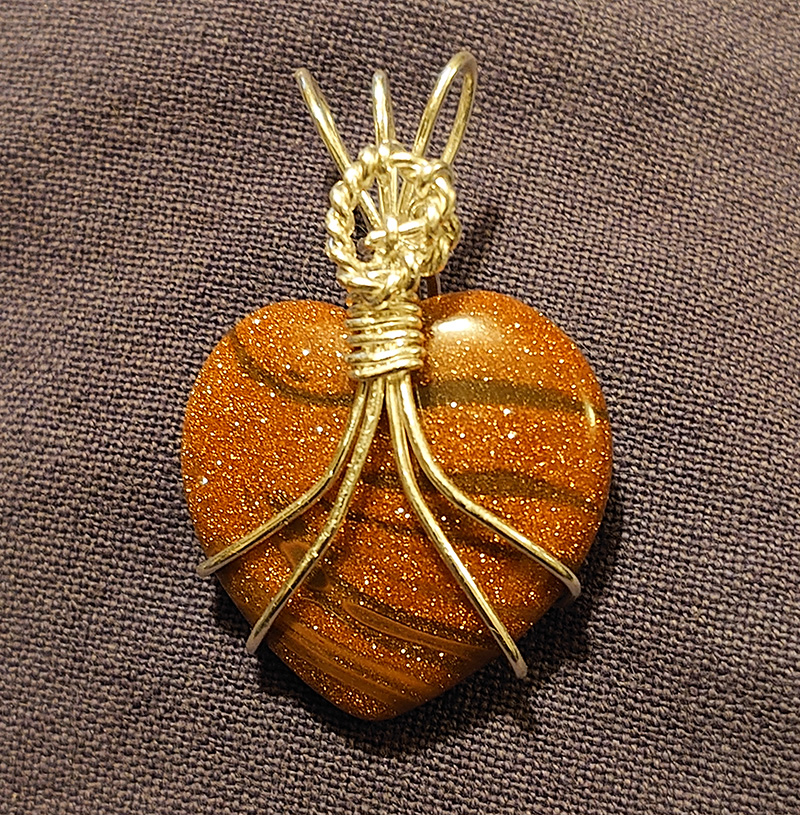 This was supposed to be our time. Our happy ever after, being together for the rest of our lives. Not just for the rest of his. I am missing him so much, and it still hurts just as much as ever, even if it has a slightly different quality to it. There’s still so much I want to say to him, and can’t. So many places I can’t go without him. There’ve been a lot of memory flashbacks just to help make things that little bit worse. I miss him, I miss my kids, I miss my life, and I miss who I was. The sheer loneliness of life now is heartbreaking and soul destroying and quite literally painful.

I’m most definitely not OK. Well, the me that is writing this isn’t. The me who goes through the motions at home, and randomly bursts into tears at the drop of a non-existent hat isn’t OK. Sometimes I go out, and it’s nice to be out, and to see people. Most people probably think I’m ok. I can chat, and laugh, and be distracted, and I’m grateful to them for including me, and for the semblance of normality it brings, while all the time feeling like I’m standing slightly off to one side from myself, watching it all go on. And then I have to go home, because I’m tired of dancing. So I go home, drained, to a still empty house. Everything is where I left it. All the things I’m not getting done are still not done. Nothing has changed. There’s a feline saving grace though. In the absence of any other option, each of our three cats will now spend some time sitting on me at some point during the day. And Max gives good cuddles. They make me cry, but that’s ok, I do that on and off all day anyway. Crying with fluffy cuddles is better than crying alone. 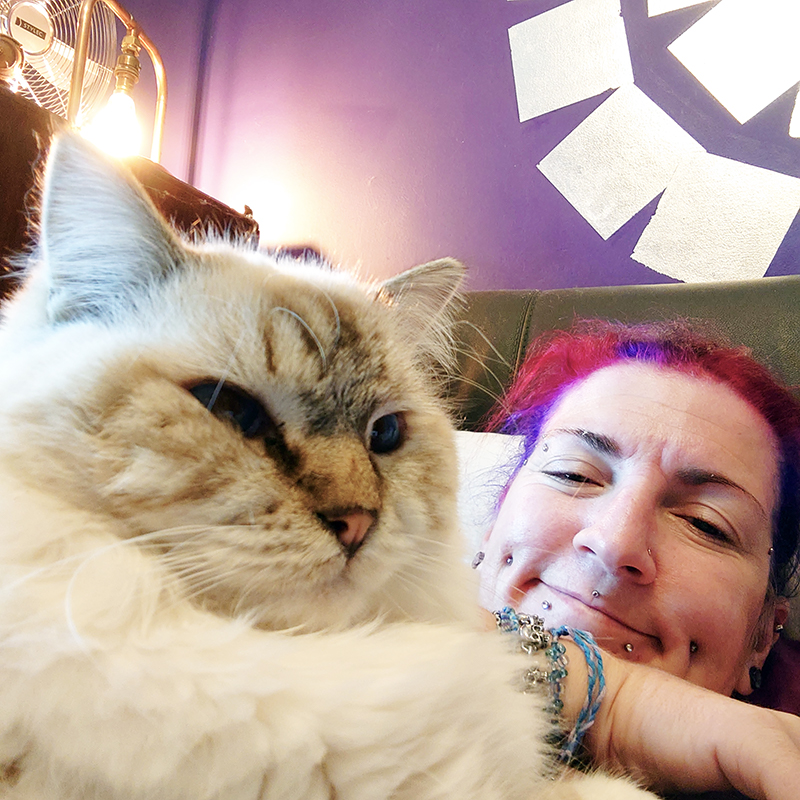 I know that with time, I will establish a new routine, I will find things to do, projects to put my mind to. I will visit people, I will see friends, I will get back on the spin bike, and maybe one day I’ll get around to going away by myself again, like I used to once upon a long time ago. I’m just not there yet. 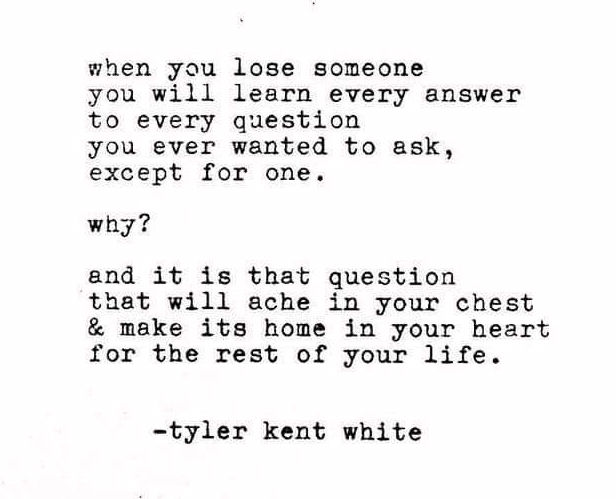